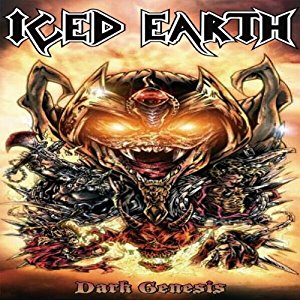 With each new album released, Iced Earth’s fan base grows significantly. But because these fans are drawn in by the new albums, Iced Earth’s early history may remain relatively unknown to them. In steps “Dark Genesis”, a 5-CD box set that uncovers the band’s inspirations, recalls their infancy, and exhibits their innovations, in all providing a complete history lesson with a single low-priced package. This box set will also be sought after by long-time fans, as it is far more than a simple repackaging of older albums; none of the material has been presented in this form before.

The core of the set consists of Iced Earth’s first three classic studio albums, “Iced Earth”, “Night of the Stormrider”, and “Burnt Offerings”. Each album has not only been remastered, but they have also been expertly remixed by Jim Morris from the original multi-track recordings. Taking advantage of technology and equipment unavailable a decade ago, as well as Jim Morris’s skills (which have become an integral part of Iced Earth’s current sound), the remixes offer a significant sonic improvement over the originals. New artwork has also been created, which evokes the themes of the original artwork while adopting the style of the band’s more recent output.

Next is “Tribute to the Gods”, an album full of cover songs. Iced Earth pays homage to the bands they grew up listening to and the bands that inspired them by recording new versions of some hard rock and metal classics. Recorded in Jon Schaffer’s basement studio, the sound is raw and fresh, which reflects the spirit of the original songs while also infusing them with Iced Earth’s recognizable touch. Included are songs from Kiss, Iron Maiden, AC/DC, Blue Oyster Cult, Judas Priest, Alice Cooper, and Black Sabbath.

Finally, “Enter the Realm”, the six-track demo responsible for getting Iced Earth’s first record deal, is being made available for the first time on CD. The original demo tape has been sought after for years by die-hard fans, so the CD version will give a wider audience a chance to hear the music that started it all more than a decade ago.

Throw in a 32-page hardcover book, package it all in a deluxe slipcase (image 1 image 2 image 3), and “Dark Genesis” becomes a perfect gift for all die-hard Iced Earth fans, old and new.

Night of the Stormrider:

Tribute to the Gods: