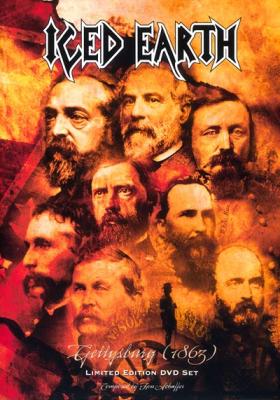 Iced Earth’s first DVD release is something different than most DVDs released by metal bands. Instead of containing live footage, it provides a deeper look at the ‘Gettysburg (1863)’, the musical trilogy that appeared on 2004’s ‘The Glorious Burden’, as well as the Civil War battle that inspired it.
The centerpiece of the 2-DVD set is the epic three-part song itself. In addition to the normal stereo version, it appears in two different expansive and powerful 5.1-channel surround-sound mixes (a ‘Metal’ mix and an ‘Orchestral’ mix). The music can be accompanied with moving images and lyrics that help document the course of the three-day battle.

Also included in the extensive package is an in-depth video tour of the Gettysburg battlefield, an interview with Jon Schaffer, two music videos from The Glorious Burden album, and other various extras.