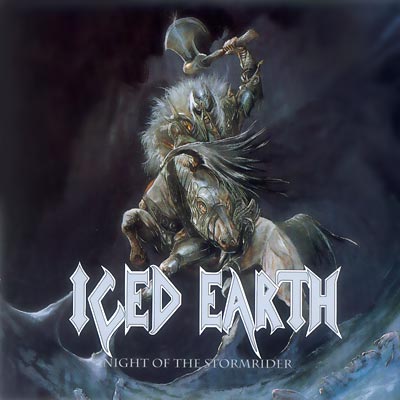 Iced Earth’s second effort is a concept album with a mystical, horrific story line. It traces the path of a man who is betrayed by religion and turns away from it in anger. The dark forces of nature reach out to this enraged man and use him as their vessel to bring death and destruction to Earth. Through it all, he feels no remorse for his deeds, and upon reaching the end, numbly accepts his fate of eternity in Hell. Musically, the band picked up a new singer and drummer for this album. The singing is a definite improvement from the debut, ranging from a powerful growl to a Halford-like scream. Such skill is necessary to portray the wide range of feeling on this album. There’s quite a bit of background keys on this disc, some choral moaning, and a memorable piano outro, which all add to the dark mood. There are also several excellent acoustic passages seamlessly interwoven with the driving guitar riffs. The music meshes perfectly with the story, magnifying the hatred, manic joy, confusion, and sadness present in the lyrics. After listening to this musical masterpiece, one cannot help but to feel some of the sadness and guilt that the Stormrider was unable to feel for himself.