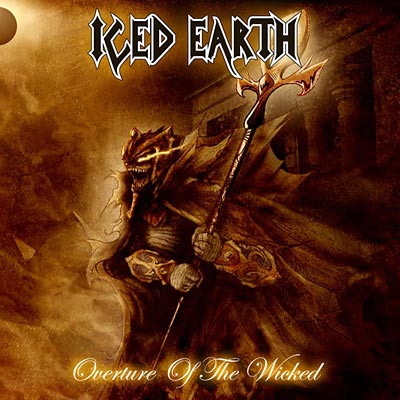 “Overture of the Wicked” consists of of four songs. The first song, “Ten Thousand Strong” is the single track, and it will appear on “Framing Armageddon (Something Wicked Part 1)”, albeit a bit different than the single version.

Second, the Something Wicked trilogy that is comprised of the songs “Prophecy”, “Birth of the Wicked”, and “The Coming Curse” has been completely rerecorded. From the ground up this is a more vicious and more atmospheric version of the epic piece. I played all of the guitar tracks with a baritone guitar and Brent and I are locked up like a machine gun with the double kicks following many of the detailed picking patterns. This makes for a more Intense and wicked sounding rhythm section. All of the vocals have been redone, obviously by Tim Owens, who did a masterful job at retaining the passion and honesty of the original, and still put his stamp on it and made it his own. We also put in some teaser atmospheric things that will give you a hint of things to come on Part 1. But just a hint…we don’t want to spoil any surprises.

For those of you that aren’t familiar with the old version or the Something Wicked story at all, you should check it out. The original trilogy is just an overview of the story that begins 12,000 years ago and leads us to modern day. You should look at the trilogy as an introduction to this whole epic. What is coming next in the 2 parts is a far more in depth look into this very tragic, heavy and apocalyptic sci-fi/fantasy story.

I can’t give anymore away at the moment, but keep checking the IE site for more updates.