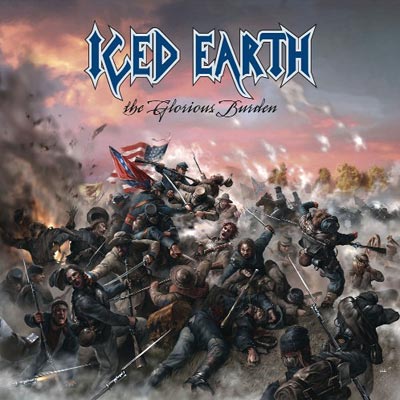 After spending much of their career focusing on dark fantasy and similar themes, The Glorious Burden marks a turn towards reality for Iced Earth. The album specifically covers events in world history, and because history is often defined by conflict and tragedy, the tone remains just as dark, epic, and powerful as previous works from the band. The album goes as far back as the fifth century A.D. with Atilla the Hun’s ravages across Europe, and as far forward as the terrorist attacks in America in 2001. In between, there is the American Revolution (“Declaration Day”, “Valley Forge”), the Napoleonic Wars (“Waterloo”), and World War I (“Red Baron/Blue Max”). The album’s centerpiece, however, is “Gettysburg (1863)”, a three-part, 32-minute epic that tells the tale of the defining battle of the American Civil War. Backed up with a full orchestra and led by the vocals of new singer Tim Owens (ex-Judas Priest), the music portrays the tremendous power and emotion that must have been present when those two great armies clashed, with the fate of a nation hanging in the balance. Taken as a whole, The Glorious Burden proves that some of our most amazing and resonant stories come not from the imagination of mankind, but rather, from our real-life deeds, for good and ill, throughout all of human history.