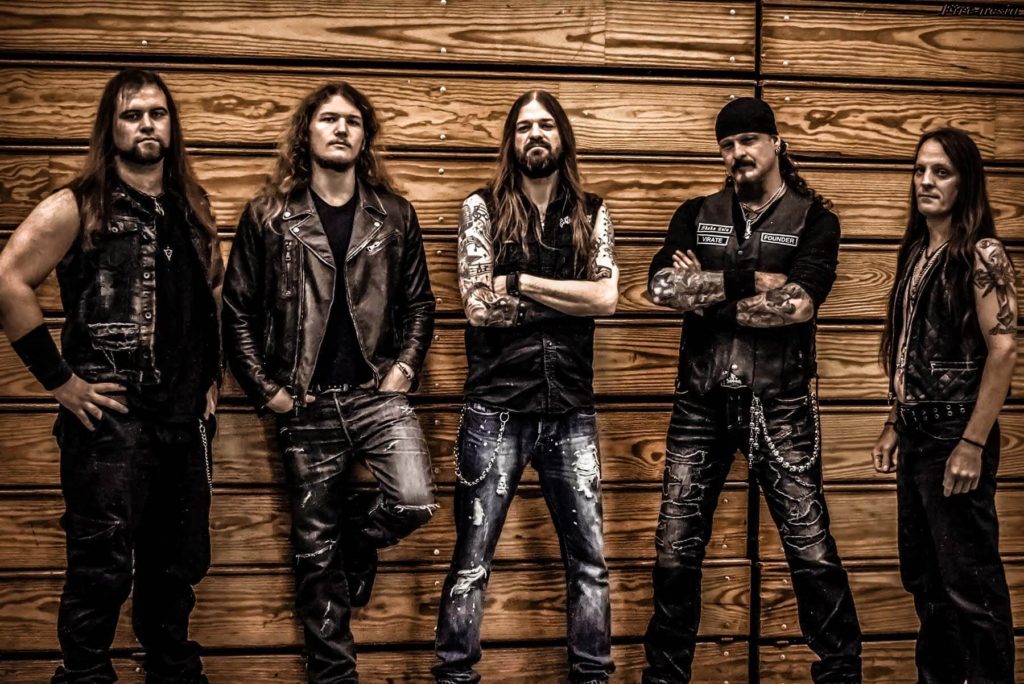 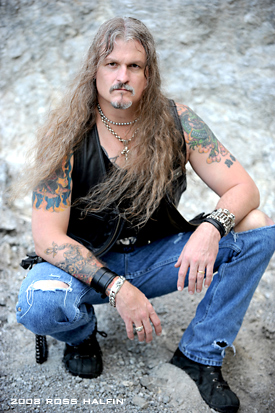 “It’s a long way to the top if you want to Rock ‘n Roll.” That line from the AC/DC classic, “It’s a Long Way to the Top,” rings true for many legendary rock and metal bands who have persevered and overcome years of adversity to accomplish world-wide recognition. Writing good music is just one part of being successful. As difficult as that can be, creating and adhering to a sound marketing and business strategy is an equally important component to a musician’s success.

Those very different challenges must be accounted for in a musician’s vision if they are to have a remote shot of making a living as a songwriter. The clearer the vision, the clearer the path to be taken, although vision and marketing alone don’t guarantee a successful journey. A myriad of intangibles must also come into play at exactly the right times. The few uncompromising musicians who pride themselves on the integrity of their craft can surely plan to encounter a path less traveled and sewn with more mountains and valleys than the road clogged with chameleons sacrificing their visions to cash in on the current fads. For two decades, Jon Schaffer and his vehicle, ICED EARTH, have taken the long, high road of non-compromise to reach the rarified air breathed by those few who enjoy lasting commercial success writing and performing music in the Heavy Metal genre.

While the journey to the top continues on, it certainly appears that the roughest roads of ICED EARTH’S journey are behind them. The dead end streets are now recognized for what they are and the open highway lies ahead for ICED EARTH. The vehicle’s tank remains full of Jon’s unique blend of high-octane passion and desire. Lessons learned over the past 20 years (“getting ripped off,” and “getting had,” not to mention “getting old,” and “getting grey”) have provided Jon with the ability to navigate through the fog and illusions of the music industry. But it wasn’t always that way.

Today’s ICED EARTH highway started in the early 1970s on nothing more than an average American side street in northeast Indiana. It was there, in a humble blue-collar town, where Jon was first exposed to music from legendary bands such as KISS, BLACK SABBATH, BLUE OYSTER CULT, and ALICE COOPER. By the age of four, Jon had become a dedicated fan to the sounds of hard rock and heavy metal. Jon’s exposure to the world of hard and heavy music came from his older sister. The two spent many hours in their youth escaping some of the harsh realities around them by listening to the bands that would be responsible in shaping what would become Iced Earth. In 1979, a life-changing event took place when Jon’s father took him to see KISS at the age of 11. The sonic experience combined with a bombastic stage show only KISS could deliver struck a lifelong “curse” upon Jon that night – an unrelenting and uncompromising desire to constantly push his talents to the limits and to write songs worthy of his name.

As is the case with so many teens making the transformation from adolescence to adulthood, Jon would become increasingly frustrated with authority figures. The frustration was not born so much from the authority that adults possessed, but rather that many of these adults didn’t take lightly to their authority being questioned. 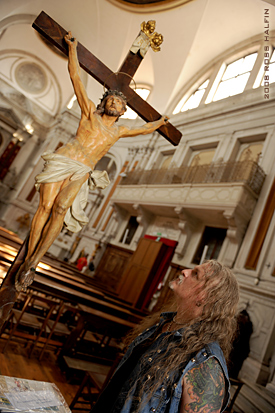 All children are born with a sense of curiosity. Adults have the option to embrace it, or crush it. At a very young age, Jon’s curiosity was driven by a need to understand not just how things work, but why they work. That desire for understanding is as strong today as it was in his youth. “That’s just the way it’s going to be,” or, “Because I said so,” weren’t satisfactory answers for Jon. Questioning authority was a right Jon held sacred. Unfortunately, a few of the clergy entrusted to provide Jon with a Lutheran education found his right to question the system and it’s beliefs anything but sacred. Such negative experiences left scars that would later provide inspiration for the soon-to-be songwriter.

The above is not to suggest that Jon was a saint while growing up in Indiana – he certainly wasn’t. His attitude towards authority was tainted by a growing, bitter resentment of authority figures that could not provide answers for their actions. These negative sources of authority would in-turn poison his views of all authority, even the authority that loved and cared for him most.

The frustration of Jon’s teen years in Indiana culminated with the tragic death of his best friend who lost his life to a motorcycle accident. His mind clouded and in need of respite, Jon would make the biggest decision of his life in deciding to leave home in 1984 at the age of 16 with only a cantankerous used car and a couple of hundred dollars to his name. A thousand miles away from the distractions in Indiana, Jon would start paving the roads in Tampa, Florida to take him to the land he promised himself that night in 1979.

If Jon didn’t know it already, he would soon learn that for every action there is a reaction. Jon traded his parent’s roof for the roof of his car that doubled as his home early in Tampa. When that car was totaled in an accident that nearly took his life, the metal roof was traded for leaking wooden roves of abandoned homes. Street smarts, not book smarts would be needed to keep the 16 year-old alive on the streets of Tampa. Income earned from jobs as a day laborer provided the income necessary to save enough money to get an apartment and eventually led to being hired as a laborer for a roofing company.  Jon spent the next three years doing hot mop roofing in the Florida sun during the day, and building the vision of his band and rehearsing at night.

At the time the band was called Purgatory, and eventually became Iced Earth when he changed the name in 1988. Jon’s first vision of his band began life under the moniker THE ROSE, which was very short lived. A bit of THE ROSE lives on however, as the font Jon used for the band’s logo went on to be used in the PURGATORY logo and ICED EARTH’s current day logo. He designed the logo for THE ROSE in graphics art class, early in the year as a sophomore in high school. These are the only bands that Jon has ever been involved in (and of course, later in his career he co-founded DEMONS & WIZARDS and started his own solo project with SONS OF LIBERTY), and has led the way in each and every one, all the way through to present day.

The harsh realities of living a homeless life on the street forced Jon to grow up fast. America was a land of opportunity, but it wasn’t going to give him anything for free. Everything had to be earned. To his credit, he was keenly aware of this when deciding to leave home. Sacrifice, determination, integrity, and unwillingness to compromise would be the tools used to pave the early dirt roads and then widen them into streets of opportunity. Ironically, these lessons were learned from people that had died no less than 200 years before Jon’s birth.

Before leaving Indiana, Jon’s time in school was more a source of aggravation than enjoyment. However, that was not the case when studying history, especially the period of the American Revolution. While many of his peers were decorating their rooms with posters of their favorite sports stars and movie characters, Jon’s room was painted with stars, stripes, and screaming eagles to honor his heroes. They were none other than men like George Washington, Thomas Jefferson, and Benjamin Franklin. Their willingness to stand up for what they believed in and to pursue it at all costs in the face of overwhelming odds struck a chord with Jon that has never stopped resonating. He would use the courage and confidence of his country’s Founding Fathers to build his own sense of self. That sense of self, complimented by the knowledge that anything is possible if you’re willing to totally dedicate yourself to the cause, gave Jon the strength to carry out on his own in Florida despite the odds being stacked squarely against him. 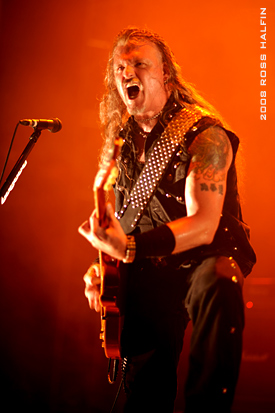 Keeping pace with Jon’s pursuit was no easy task. Some band members couldn’t keep up and were replaced. Others grew weary of the chase and left to pursue other career interests. However, important constants set in place in 1984 with the bands first demo, PSYCHOTIC DREAMS; under then band moniker PURGATORY, have never left.

Always grounded by a gut instinct grown keener with each passing year, a work ethic framed by inner integrity, and an unwavering commitment to give ICED EARTH fans nothing less than 100% of what he is capable of, has in turn rewarded Jon and ICED EARTH with one of the most loyal fan bases that any band in any genre could hope to enjoy. A fact that they are extremely appreciative of everyday.

On DYSTOPIA, the new album from American metal icons ICED EARTH, Jon Schaffer found that space. And made it his own.

In much the same way HORROW SHOW (ICED EARTH’s tribute to classic characters from literature and movies) was born, Schaffer’s interest in dystopian themes in literature and movies led him to try his hand at that genre as well – even paying homage on the new album to the movies Dark City, V For Vendetta, and Soylent Green.

Add a pinch of Orwell (“If you want a picture of the future, imagine a boot stamping on a human face — forever”), a soupcon of Blade Runner, and a smattering of headlines from around the world and – voila! – you get DYSTOPIA…perhaps ICED EARTH’s heaviest and most menacing album to date.

A blistering 10-song tour-de-force that explores the nightmarish Orwellian world of the future (or is it the present?), DYSTOPIA runs the gamut of poignant ballads, bone-crushing riffs, stratospheric vocals, and chilling lyrics. It is a soul-searing album not for the faint of heart.

Of special interest to long-time fans of the band are two songs on DYSTOPIA (the title track and “Tragedy and Triumph”) that feature the return of the “Something Wicked” storyline and “Set Abominae” – who, when last seen in THE CRUCIBLE OF MAN (2008), had taken his position as ruler of the world.

Now armed with the dynamic vocal range of vocalist Stu Block (fresh from his success with prog-metal favorites INTO ETERNITY), and a renewed passion he hasn’t felt for many years, Schaffer forged an album that cannot be ignored.

It is an album whose time has come…

…and a massive world tour you won’t want to miss.