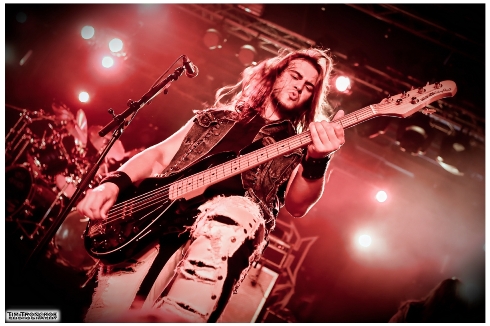 “I began playing at age 11. My brother, Chris, was already getting pretty good on lead guitar so I picked up bass. I started my first band, Breakdown, when i was 12 with 2 friends & we did OK until the bass player position came available in my brother’s band, Fury UK, & I joined in August 2008 making my debut at Bloodstock Open Air.

With Fury UK I released 2 full length albums & a DVD. I was lucky enough to tour many parts of the world, also sharing a stage with some great bands – Saxon, Y&T, Michael Schenker Group, Blaze Bayley & of course Iced Earth in the winter of 2011. I was proud to be announced as new bassist with Iced Earth on 10th April 2012.

So far, my time with Iced Earth has been awesome! I really enjoyed the first tour, recording the DVD in Cyprus was amazing & I can’t wait for the next chapter. To relax I like to exercise and play my guitar or bass.