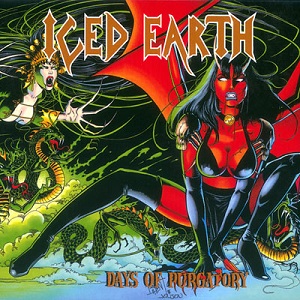 “…In this collection you will hear songs that were written in a time span from 1986 to 1994. So for some of you this will be a stroll down memory lane and for you newer fans you will hear some classic I.E. re-mixed, re-sung and on a few tunes, bass and drums re-done. All of these older songs, in my opinion, are better than what was originally released…”

“…the idea to use the word purgatory in the title…works for two reasons. 1.) It was the original name of the band from 1984-1989. 2.) It also symbolizes the many years of “suffering” and “paying dues” we have endured to get where we are now. And though we have a long road ahead of us things are definitely on the upswing…”

“…In the eyes of this artist Iced Earth and metal music are a life long commitment and we’re not budging, we are metal and we’re proud of it. Yes, Iced Earth will mature and we will grow, but you can count on us being ever faithful to ourselves and our art, and for this I’m sure you will always be satisfied as the listening audience. Iced Earth will always play what we believe in. Fuck Trends and Fuck Posers!!!”

Count on it and thanks for your support,

Originally produced by Tom Morris and Jon Schaffer.
Re-mixed and Re-produced by Jim Morris (May 1996 – January 1997).
Recoded at Morrisound Studios between 1986 and 1994.