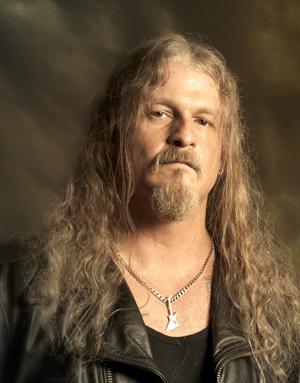 “Iced Earth is the only band I’ve ever been in, though it was briefly called The Rose in 1984, then Purgatory until 1988. I started playing guitar when I was 14 and am a self-taught player and songwriter. Though the guitar is responsible for much in my life, it gets a lot less of my attention than I’d prefer because I’m so busy steering the ship that is Iced Earth. I left home when I was 16 and started the band, and it’s been a hell of a journey so far!

“I was never interested in playing cover tunes, but did finally venture down that path with the release of the Tribute to the Gods CD in 2002.  I’ve been involved in two ongoing and very successful side projects, one being Demons and Wizards with my dear friend, Hansi Kursch, and a solo project called Sons of Liberty.

“I have a close circle of family and friends that mean the world to me and that I am fiercely loyal to.

“My passions are studying history and current events, and in consequence, standing against, and exposing, tyranny.

“To relax, I like to ride motorcycles, scuba dive, white water raft, exercise.