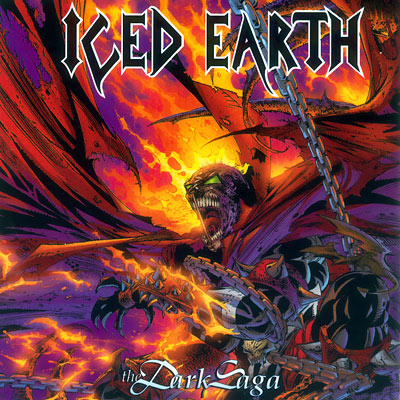 Iced Earth continues to mature and evolve with their fourth release. “The Dark Saga” is a concept album based on the popular Spawn comic book series. It tells the story of a man who sells his soul in order to return to his true love on Earth. But he soon discovers that she is married to his own best friend. He is left completely alone in the world, and although he has good inside, he is influenced by dark forces. Everything that he desires is denied, even his own death. Fans of earlier Iced Earth albums might notice the change in the musical style to fit with this dark love story. The focus is less on technical musicianship (although the playing is still as impeccable as ever), and more on creating a complete story through sound and words. Thus, the music is generally more dark, emotional, melodic, and simple than other Iced Earth albums. This is not to say that the songs are uninteresting; to the contrary, some of the most amazing Iced Earth songs appear on this album. The crushing heaviness and power remains, but it is entwined with beauty and grace, creating Iced Earth’s most thoughtful and emotional work to date.